BTL will be closed for the Christmas Holiday from December 24th through January 2nd.
BECOME A DISTRIBUTOR | CONTACT | FAQs

Golf courses have always represented green oases in the middle of urban or suburban sprawl. The civilized thwack of a golf ball, polite murmured accolades from fellow players and golf carts trundling along to the next tee are all misty childhood memories.

And who could forget that golden lake? Dazzling the eye with the reflected light of dawn, a brilliant, peaceful vista proclaiming that all was right with the world and nothing was impossible. Surely, the magnificence was simple, enduring, and effortless. Right?

In reality, that vista and those peaceful greens required careful mowing, fertilizing and nightly irrigation. The lake was the focus of worried conversations about the recent lack of rainfall, and oh, that dam. Seems it had been leaking and needed to be rebuilt before it gave way completely and washed out Mr. and Mrs. Smythe on the 4th hole.

Alas, even the idyllic places from childhood are part of the real world and require a lot of work. But did you notice how that lake stood out? Could you see it in your mind’s eye? Did you ever notice just how much water exists on a golf course? Why is it there? What is it for? And most importantly, does that pond have fish?

This book is about golf course ponds, but we’ll start with a look at how the sport has evolved over the ages and how it’s entering a new phase of evolution to meet the changing needs of society. Ponds and other water features have always been critically important to successful golf courses, and that continues, but new expectations are being established. The mission now requires golf course ponds to be attractive while also functioning as reliable storage and thriving wildlife sanctuaries. That’s a tall order.

The Enduring Sport of Golf 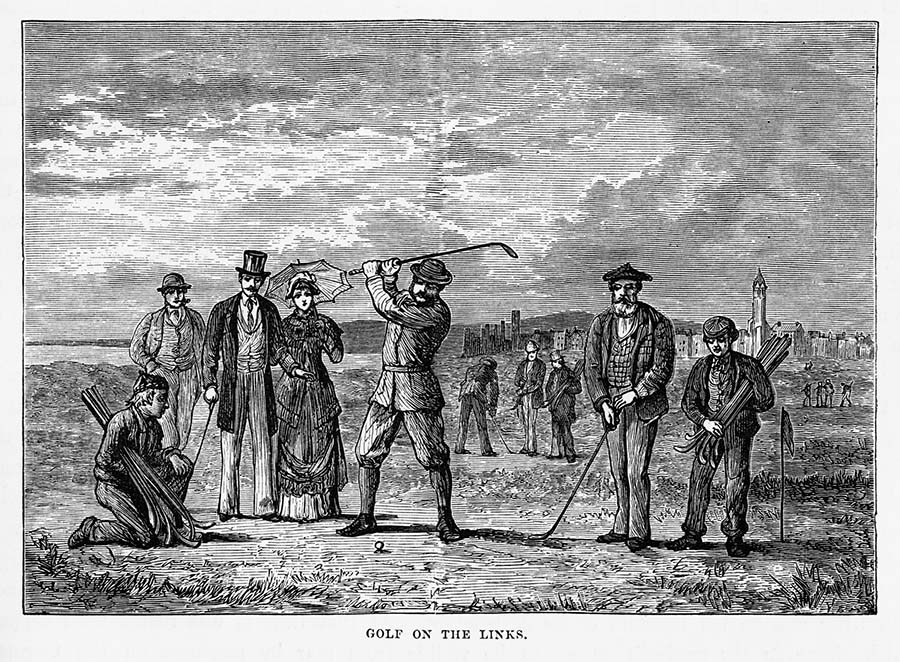 Golf is one of the oldest sports that continues to be played in its original form in modern times. While similar games can be found around the world and throughout history, the modern form of golf clearly emerged from Scotland in the 1400s. Scotland’s version is distinct from other ball-and-stick games because rather than measuring the furthest distance traveled or proximity to a specific point, its ultimate target is a hole in the ground.

The popularity of the sport grew steadily in Scotland until King James II prohibited the game, considering it a distraction from military pursuits. Archery was a more appropriate way to spend one’s leisure time, he decreed. It was an abiding concern: Kings James III and IV both reasserted the ban during their respective reigns. With the signing of the “Treaty of Perpetual Peace” in 1502, however, the ban was lifted and shortly thereafter James IV himself headed out to the links with a brand-new set of clubs. Thus, sealing the illustrious status of the sport for centuries.

Originally the game was restricted to royalty, the nobility, wealthy merchants and other people of power. Notable signs of acceptance for the general populace appeared over the next hundred years, including a decree issued by the Archbishop of St. Andrews, giving local citizens the right to play golf on the links at St. Andrews. The first woman known to play golf was Mary, Queen of Scots, to the distinct displeasure of the church.

One significant barrier to widespread participation in the game across the centuries was expense, whether for joining exclusive golf societies that conferred access to their links, or for the equipment, including repeated investments in golf balls. An improved (and considerably cheaper) golf ball invented in 1848 led to a much wider adoption of the sport.

In the early 20th century, golf was rapidly expanding into the US, and American players were finally coming into their own. Great players like Ben Hogan, Arnold Palmer and Jack Nicklaus came onto the scene between the 40s and the 60s. Television coverage expanded alongside the star power of the best players, and millions were attracted to the look and leisure of a golf-centered lifestyle. In the 1950s and 60s, builders began planning home developments centered around golf courses, aimed at established families who would be around to play golf well into their golden years. It was a successful model and golf course communities exploded. During a period of "boom growth" in United States golf courses in the 1960s, approximately 25% of courses built each year were developed as a part of a real estate package. By the 1990s, more than 60% of new golf courses were tied to communities of new homes.

Such a proliferation of new golf courses might have been dented by the 2008 financial crisis, but by then Tiger Woods was on the scene; the first African American to win the Masters Tournament. His youth, athleticism and undeniable talent sparked a huge surge of popularity and diversity in younger generations. By 2017, 26 percent of newcomers to golf were non-Caucasian and over 10,000 high schools offered competitive golf teams. This new enthusiasm for golf reinforced developers’ devotion to golf course communities as a winning investment -- in the 10 years following Tiger’s win at the Masters, over 2000 new golf courses were constructed.

Despite the Tiger Woods effect, in the last 15 years the number of people playing golf has actually been on a steady decline. The older retirees who were accustomed to traditional versions of the game gradually became less active. The next generation, possibly due to economic uncertainty, eschewed retirement and continued to work well into their golden years, which meant less free time to spend on the links. The new golf courses built in their premier communities often didn’t fit their needs anyway. Real estate developers, overly focused on the financial draw of a top designer golf course, often failed to consider the long-term viability of the business itself and planned golf courses that were too expensive, too long, and too difficult for the average golfer. This meant that the primary draw for home buyers had no real value for its residents and supply quickly outpaced demand for these championship-level courses.

The demographics of the primary golfer are changing. Today’s American worker devotes well over 40 hours per week to work. Add another 45 minutes of commute time each way, time with their children and family, household needs, and all the other interests that take up time and energy, and there are simply not many millennials who are prepared to devote 5 hours of their precious free time to running 18 holes even 2 or 3 times a week. For those who persevere, they may play a few times a month rather than a few times a week. Alternatively, venues like TopGolf offer courses that can be completed in as little as 10 minutes, provide instant feedback on your game, and offer plenty of other entertainment options for your family, which gives rise to significant competition. For time-strapped professionals, options like weather-sheltered bays, nighttime golfing, casual dining, and other advantages make traditional golf a tough cookie to sell.

Wisely, developers are adjusting to the new demographics and preferences of younger Americans. They’re still building golf courses, not only for those who love the game, but because young professionals and families still want something special out of their neighborhood. Focused on personal wellness, nature, and a more active lifestyle, there is a significant segment who also enjoy the view of rolling, verdant greens and well groomed “natural” areas outside their windows. The addition of trails for walking, running and biking, options for boating and fishing, and access to casual dining demand relatively small adjustments to a developer’s established recipe while dramatically broadening the appeal.

The realities of the COVID-19 pandemic have sent shockwaves through American society as we have adapted to an entirely new lifestyle. With more people working from home, suddenly a whole block of “commute” time has been freed up. The neighborhood golf course is the perfect place to knock a few balls around before buckling down in the home office. Across the country, club managers have noted an influx of new and returning players: tee times are once again booked up and sets of beginner clubs are on back-order. Mindfully played, golf is a fun, outdoor, safe, and socially distant activity.

In big cities across the country, moms and dads are packing up their cars to move to the bigger, more affordable country house. Here, the hours before Zoom school and clocking in for your big meeting allow some moments to breathe, make some coffee, take a walk. No more sitting in traffic. No more carpool lines. Now that everyone is spending a lot more time at home, developers have an amazing opportunity to build localized, family-centered communities, immersed in nature, with gorgeous golf courses and plenty of other things to do as a family. Things may be changing for communities everywhere.

The most versatile liner on the market today and perfect for your golf course pond needs, AquaArmor maximizes protection from harmful UV rays, tear resistance and punctures that cause leaks. Simply the best liner on the market.
Go Now
Over 100+ Pages of Content 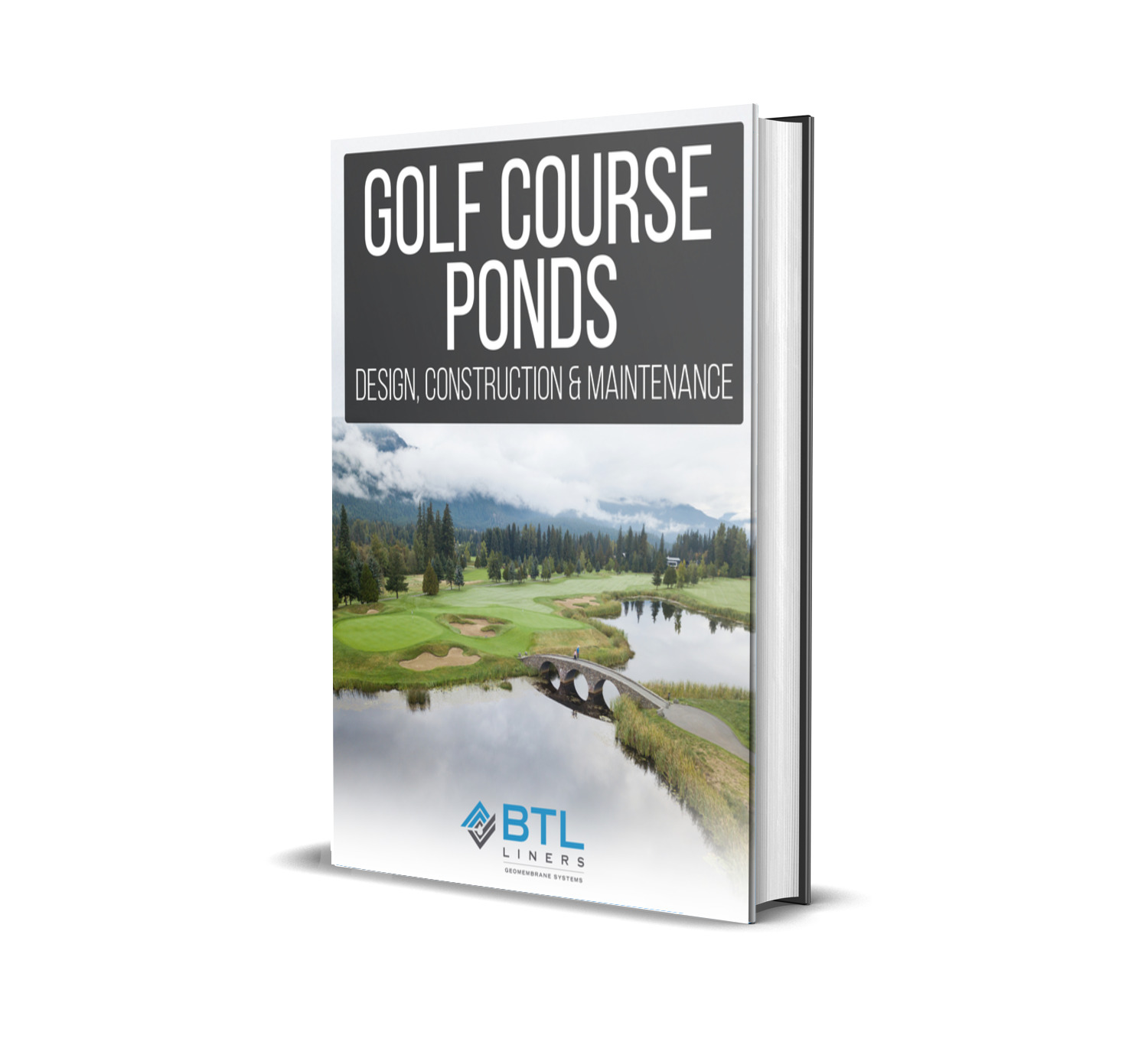