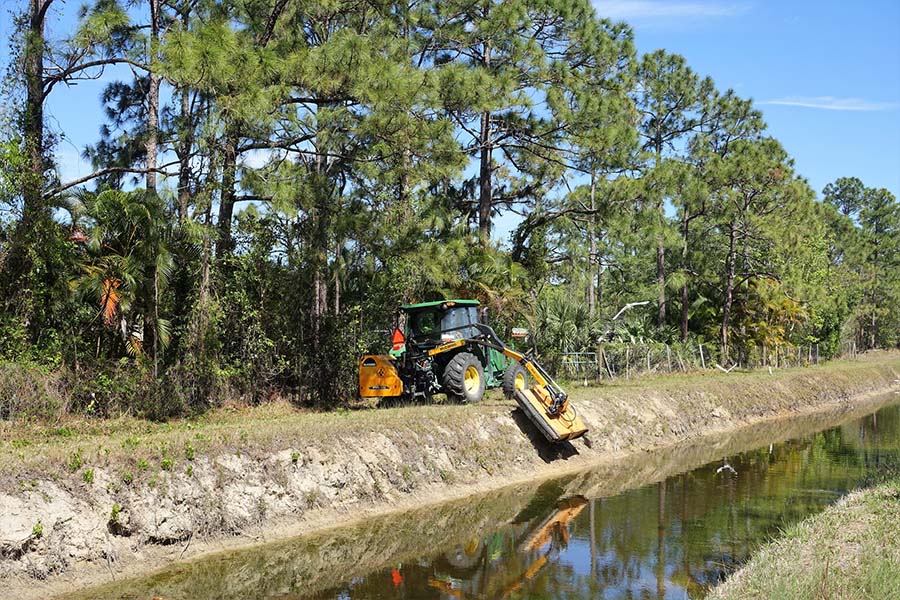 Each drainage system requires a different design and combination of the standard elements. Yet almost all drainage systems, regardless of eventual use or size, tend to combine the same handful of features in different ways. Like the capillaries, veins, and arteries of the body, various drainage elements collect water from across the fields or around a structure and deliver it to a better location. Understanding how channels, culverts, holding ponds, and ditches work together will help you build the best possible drainage system.

The smallest parts of a drainage system are generally referred to as ditches, furrows, or trenches. In an agricultural system, these features are dug into the crop fields and alongside farm roads to redirect water that falls directly onto the soil from irrigation equipment or natural rainfall. This is the first line of defense against flooding in systems designed to handle stormwater in neighborhoods and urban areas. Ditches and trenches can be simple depressions dug into the soil or concrete-lined features with greater depth and size. No matter the size or expected volume, this part of the drainage system performs best when lined.

Channels connect numerous individual ditches or furrows together to start collecting and consolidating the runoff or waste water. For larger systems where water is being discharged from equipment or specific points, channels are often the first part of a drainage system built because smaller ditches simply aren’t needed. These features are almost always lined because it’s their purpose to redirect the water somewhere else, not discharge it into the soil. Channels tend to be wide and have more gently sloped banks than the smaller ditches and trenches since they need to remain accessible for cleaning and inspection. Due to their increased depth and volume, channels can also become dangerous if built too narrow and steep-sided since animals or people could fall in and have trouble getting back out. With drainage systems often covering multiple miles, it’s difficult to fence in every channel and canal. Designing them with safety in mind is much easier.

For stormwater drainage systems and flooding controls, catch basins are essential for accumulating rainwater and overflow from local waterways. Catch basins are installed in the ground like dry wells, but they’re lined to prevent seepage since the point is to redirect the water rather than to discharge it in place. They are installed at the lowest points of depressions in fields or around structures to absorb water that would otherwise simply sit on the surface of the soil and contribute to flooding. Catch basins may be a subsurface form of drainage, but they work well when connected by pipe to other channels and canals. They take up less space than long drainage ditches or trenches and provide more volume control in areas where there is a single low point.

Canals are the largest part of the drainage system designed for transporting runoff water. They’re lined whenever possible to control erosion since thousands of gallons can travel down the waterway at once. They also pose the biggest hazard to curious wildlife and humans and should be fenced whenever possible. Irrigation canals are similar to drainage canals, but they’re used for bringing in fresh water rather than runoff that’s already made contact with the fields. If you’re reclaiming your runoff for irrigation purposes, the two types of canals may connect to feed the supply back to the beginning of the system.

Culverts are generally pre-formed pipes or arches that allow water to flow under and through land barriers and structures like roads. They can connect to various types of drainage systems to discharge the accumulated water in a controlled water rather than just releasing it into surrounding ditches. Culverts are often used as part of agricultural drainage systems aimed at reducing standing water and flooding around farm roads. They can also play a role in transitioning between surface and subsurface drainage equipment and may be repurposed into dry wells themselves.

All of these drainage features connect together and eventually release the water carried through the system into a holding tank, pond, or an open waterway. Whether you only need a few drainage ditches or an entire system of channels and canals, BTL Liners can help. Contact us for recommendations on where to use what liners throughout your design for a drainage system.