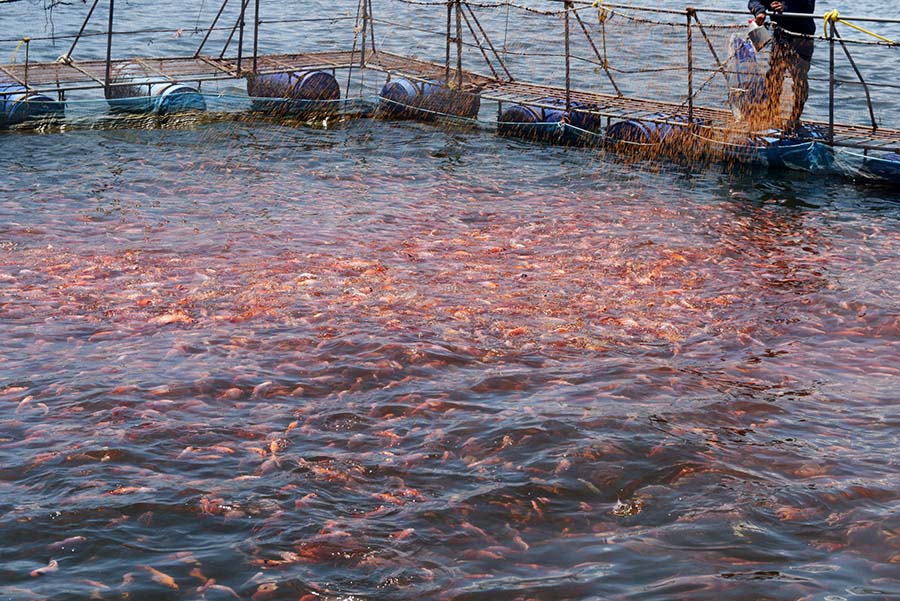 Feeding fry properly is the single most challenging part of running a nursery pond. Fry are not easy to feed, and even a steady supply of phytoplankton and other tiny lifeforms can suddenly disappear overnight or fail to keep them thriving. Transitioning fry from live foods grown in the water to mash or micro-pelleted feeds is a particularly difficult period. Most water water species spend about one month in a nursery pond before reaching fingerling size, while cold water species can take up to three to six months. Feeding your fry at the right stages with the right foods is the only way to keep them growing at a profitable rate.

When to Start Feeding

For both quick growing warm water species and slower growing cold water fish, phytoplankton and algae form the basis of the fry’s diet for the first few days to weeks of life. Newly hatched fish take their sustenance from an attached yolk sac, but that sac is depleted as early as the second day of life in some species. Most fry deplete their sac by the third to fifth day and must start feeding. Make sure freshly hatched fry are transferred to fertilized nursery ponds right as their sacs are drying up so they’re not left hungry and losing energy. Even if only 10% of the fry have lost their yolk sacs so far, it’s time for the rapidly developing fish to gain access to an appropriate new food supply.

Aquatic insects growing in your nursery pond can harm your fish fry in two ways. First, non-predatory insects may eat the same algae and phytoplankton as your fry, outcompeting them for food if there’s a population swell. Second, some predatory insects will directly target your growing fry as a food source. Notonectids are a family of insects found all over the world that feed directly on small fish fry and tadpoles. Commonly known as backswimmers, they’re a dark insect that swims just under the water’s surface with two powerful legs. You can’t use pesticides to control their populations unless their food-safe, and edible fish can only be treated with food-safe products. Oil treatments that blend horticultural soap with food-grade vegetable oil are a trusted technique for suffocating most unwanted insects and larvae, but care must be taken to skim the oil off again in time for feeding so the fry aren’t engulfed in it.

It’s easy to panic and start adding fish food before the fry are large enough to actually consume it. This leads to food accumulating on the bottom of the pond, rotting away to contribute ammonia to the water, and using up dissolved oxygen. This is why fertilizer applied before the fry arrive is actually more important than fish feed during the first two weeks of growth. Start feeding the fry within the first week of being introduced to the pond at highly reduced rates to transition them into using formulated feed. When you see fry visibly visiting the surface to eat, feed them as much floating feed as they’ve consume within 20 minutes in two separate feedings. If you’re raising a species that only feeds on the bottom, maintain high water clarity so you can see how quickly food is disappearing among the shoal.

Both herbivorous and omnivorous fish species tend to start well on phytoplankton and algae growth and transition easily into a mash or pelleted food. Strictly carnivorous species are slightly harder to raise because they require multiple daily feedings of freshly hatched brine shrimp, tiny worms, or a similar source. Despite herbivorous fish only needing live plants or algae to keep them growing, this is impractical in a highly controlled nursery pond environment. Use a commercial feed formulated with vegetable protein sources instead of trying to grow duckweed or other common live food sources used in rearing ponds for larger fish.

Capture a few fry each day from the nursery pond to determine when it’s the right time to start commercial feed applications and when to increase feeding. A net will work for occasional catching of a fry or two to measure, but for routine measurements to track growth rates, invest in a larger catch box that doesn’t harm the fish in the process. This reduces losses just for routine grading and tracking.