How Does Ditch Lining Work for Existing Ditches? 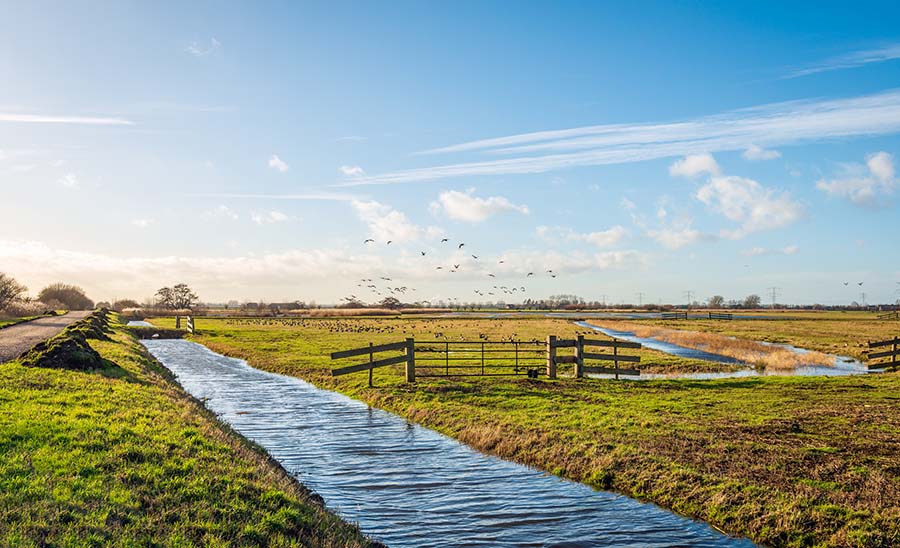 Existing ditches can benefit even more than new structures from being lined. While a new bare soil ditch will work properly for some amount of time before it begins to erode or collapse, older ditches are already well into the cycle of damage caused by erosion. Adding a liner before that undercutting or soil loss continues can save a ditch that otherwise might need filling in and complete replacement. If you’re considering ditch lining for existing water channels, here’s the basic steps you’ll need to handle installation.

Liners have to rest against a compacted layer of natural soil, not a loose accumulation of sludge or silt. It’s not enough to simply drain a ditch and push the liner down into its existing surface. Scraping out any silt, sludge, debris, and other material at the bottom of the ditch is essential. This ensures the liner rests against a supportive layer of compacted dirt. Sludge also tends to create gas as natural material trapped under the water slowly breaks down. If you leave sludge and debris in place under a new liner, it will slowly rise up in spots as the methane gas lifts it.

Any previous flexible liners or spray-on polymers should be removed as much as possible before a new liner goes in. Leaving old, leaking materials in place increases the chances of problems with the new liner, especially if the old materials are uneven or lumpy. The gaps created by this uneven surface allows water and air to gather under the new liner and lift it up. Concrete can often stay in place as long as it’s still smooth and lacks large gaps in the surface that would let the flexible liner sag. Badly damaged concrete must be broken loose and removed since the sharp edges of the chunks could tear or wear holes in flexible RPE material. The ditches may need reshaping and stabilization of the soil if erosion or damage have occurred.

Existing ditches tend to establish heavy vegetation along the edges due to supplying a constant and steady source of water. You’ll likely spend more time preparing the banks by removing weeds and grass than on the rest of installation alone. The raw soil exposed on cleared banks is fragile and prone to erosion, so aim to install the liner as quickly as possible after removing vegetative cover. Work in sections to cut grass and weed roots and then install liner rather than handling each step entirely before moving on to the next. If you end up with your banks collapsing into your ditches before you can add the liner, there will be a lot more excavation work needed before the project is done.

Once the ditch is clear of sludge and reinforced as needed, it’s time to install the liner. Since most ditches are narrow, this will generally involve rolling out the liner alongside the ditch and then laying it down into the channel. Work on small sections at a time to make it easier to get a snug fit without accidentally dragging the entire length of the liner into the ditch. Try laying an entire run of ditch liner before anchoring it in place or trimming the edges since the material will move around during these two steps.

Resuming Use of the Ditch

If you didn’t have to seal any seams on the job site, the ditch will be ready to use again as soon as the liner is in place. Seam sealing steps vary in their curing times, so check with any adhesives or heat welding tools you used for guidance on waiting periods. Once you’re sure the seams are strong, you can release water back into the ditch.

With this checklist, you’re ready to plan the renovation of older ditches that aren’t performing up to your standards anymore. New liners from BTL Liners will ensure you get every drop of water right where you need it, rather than losing it through seepage along the way.