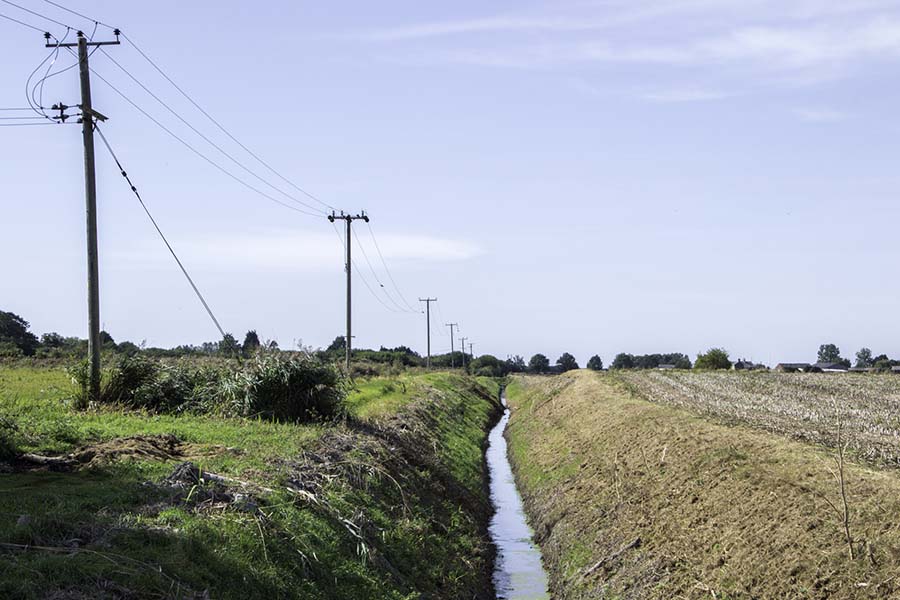 For centuries, drainage ditches were impromptu installations that weren’t lined or even executed with much planning and foresight. As new materials have been developed over the years, multiple options stood out for the difficult setting of the drainage system. These liner options range in price, installation difficulty, durability, and maintenance requirements. Choosing the right liner for a specific drainage system is a matter of weighing all of the features and disadvantages of each material. Learn about everything from poured in place concrete to flexible liners to prepare for making a choice on your project.

Flexible pond and canal liners are made from various polymers known for their flexibility and durability. Unfortunately, some of these liners aren’t so water-safe and tend to leach extra chemical components to clean from the water before discharging it. Other liners can’t handle the acidic composition of many waste water mixtures or break down rapidly when exposed to UV rays from the sun. Yet if you find the right flexible liner, you’ll have the best possible liner for your drainage system. The material is easily conformed to practically any curve or shape, while many polymers weigh only a fraction of other liner materials.

Your best option for a flexible liner is multi-layered reinforced polyethylene (RPE). This material combines the best of both low density polyethylene (LDPE) and high density polyethylene (HDPE) in a single package. The woven tape reinforcement also provides advanced rip prevention protection to make this the toughest flexible liner available. Polyvinyl chloride (PVC) liners aren’t a good idea for drainage systems due to their likelihood of releasing chemicals into the water and reacting badly to UV rays and waste water contaminants. Ethylene propylene diene terpolymer (EPDM) is too thick and heavy for easy installation, especially in smaller installations like individual ditches and canals.

The next most common material used for lining small drainage ditches in agricultural systems is pre-formed steel. Small half-circle liners are pressed from sheets of stainless steel, allowing the agricultural workers to assemble the sections on site for a complete liner of any length. However, these steel sections are prone to gaps and leaks where they fit together. If the workers handling installation rush, it’s all too easy to create a drainage system that is prone to seepage until it’s redone. The material also breaks down more rapidly than flexible liners due to its reactive to corrosive elements in waste water runoff.

Pre-formed concrete sections are also available for lining certain parts of a drainage system, including culverts specifically. This material is faster to install and tends to cost less than poured in place concrete, but it’s also highly likely to leak at least a little at the seams between sections. Flexible liners are easily fabricated with minimal seams or sealed on site with heat equipment, creating a water-tight seal that prevents leaks and seepage as much as possible. The weight of pre-formed concrete makes it difficult to move to each part of the drainage system and manipulate it into place by hand. This greatly inflates installation labor costs when compared to flexible liners.

To get a drainage liner that’s free of seams, it’s possible to pour concrete in place over the surface of the drainage system with the help of forms. This liner is less likely to leak due to the reduced number of cracks and seams, but cracks will eventually develop in all concrete liners as the material freezes and thaws over time. Soil shifting is another common cause of cracks and leaks in poured concrete liners. If you must use concrete for its erosion protection features, consider putting a layer of RPE flexible liner under the concrete to capture any moisture that makes it past the first level of liner.

Rip rap is just one of many names used to refer to the large pieces of rock and stone used for covering banks and creeksides. This material is far larger than gravel or river rock, and the combination of its high weight and angular edges prevent it from slipping off of banks and moving due to erosion or water pressure. Rip rap isn’t actually a liner material when used in a drainage system because it’s highly porous due to the gaps between the stone. However, it does play an important role in holding down flexible liners and keeping UV rays from shortening the life of the material. Most rip rap installations are combined with another type of liner to protect the drainage system from erosion, unauthorized access, and exposure.

Some other materials are used in different parts of the world and country, but they’re far from common and often unavailable in other areas. For almost all drainage systems of any kind, a flexible liner made from a multi-layered RPE material is the best option. Reach out to our team here at BTL Liners to learn more.