What is a Godzilla El Niño? Conditions are developing that indicate that this winter’s El Niño could be the most powerful on record, bringing once-in-a-generation storms to California in late fall or early winter. Those conditions, including steeply rising ocean temperatures and weakening trade winds, mean this year’s event could even surpass the 1997 El Niño, which brought an entire year’s worth of rain to downtown Los Angeles in a single month and drenched parts of Orange County with more than seven inches of rain in a single day. This volume of rain can produce massive problems such as catastrophic flooding and mudslides. By some estimates, the 1997 El Niño produced more than $1.1 billion in damages, including washed out roadways, flooding and significant damage to agricultural production. So, while Californians pray for rain, flood control district officials across Southern California are upgrading dams and cleaning out tens of thousands of catch basins to hold mud, rocks and debris that could be swept along drenched hillsides. The news further north is less certain. In the past, some strong El Niño events have brought record rainfall to western Oregon, while others have actually resulted in drier than normal conditions in the Cascades. A more reliable prediction is that temperatures across the Northwest will be warmer than normal, which is not good news for the potential snowpack.

Will it finally end the drought? In a word, no. To make up for four years of decreasing snow pack and groundwater depletion would require 2.3 to 3 times the average annual rainfall across the state—substantially more than we’re likely to see in a single El Niño, according to Kevin Werner, the National Oceanic and Atmospheric Administration's expert on climate in the western United States. Even a very wet winter doesn’t guarantee that the rain will fall in the right places. Most of California’s most important municipal and agricultural water supplies are giant reservoirs located north of San Francisco, where El Niño’s storms typically don’t reach. “This is not strong enough yet,” says Bill Patzert, a climatologist with NASA’s Jet Propulsion Laboratory, “The really big El Niños—we’re not there yet—can soak the whole state. But right now, it’s possible to get a lot of flooding and mudslides in the south. In Northern California and beyond, you could get below-normal rainfall and snowpack.” Finally, even if a very robust El Niño manages to cover the entire state with generous amounts of precipitation, there is no guarantee that the precipitation in the Sierras will fall as snow. With rising temperatures there, this could be a huge problem. Not only would this fail to rebuild the precious snowpack, which banks about 30% of the state’s water supply for the summer months, but in order to prevent dams from overflowing, officials may be forced to flush this superabundance straight into the ocean. In short, prudence demands that we prepare both for the dangers of potential flooding and for the likelihood of continued water shortages. Our next blog will discuss what preparations we can make in the next few months, including excavating and lining surface water storage ponds and considering what types of protection we should offer growing crops in the event of heavy rains. 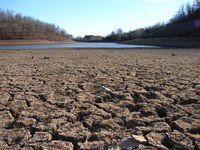