The Issue of Erosion 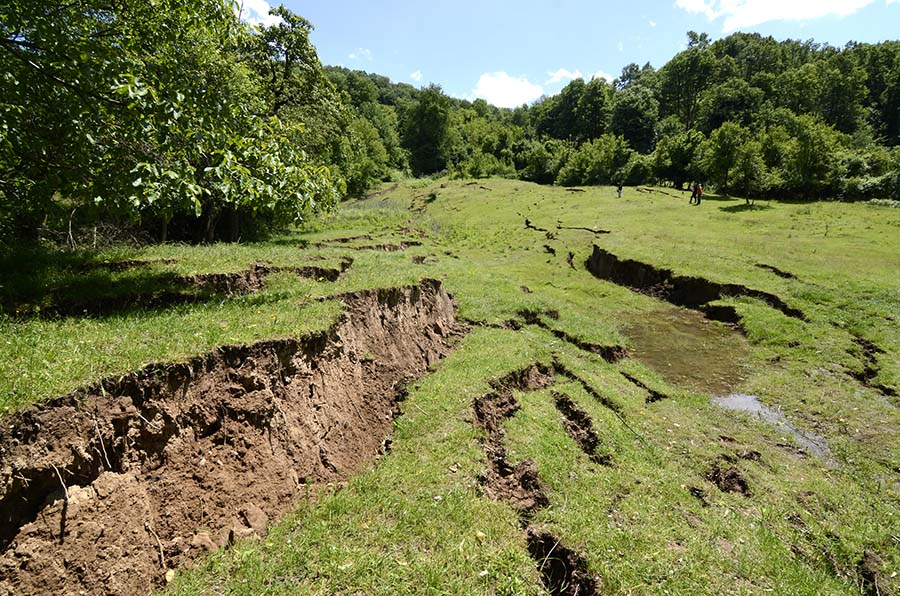 In the strictest sense, erosion is simply the movement of soil from its original position on a surface. Water is the primary cause of erosion, but wind erosion is also a major problem in many parts of the world. Thankfully, geotextiles and similar materials work well for both of the most common causes of soil movement. Irrespective of the causes, soil erosion has the potential to destroy productive agricultural land, threaten the structural integrity of buildings, and wash out entire roads or coastlines. Make sure you understand the importance of erosion control before undertaking a prevention project, to ensure you’re giving the topic the attention it deserves.

Losing soil due to the movement of water or wind does more than just make unsightly rifts in the ground. Even invisible erosion over the surface of bare soil carries hundreds of pounds of valuable top soil off of agricultural land each month. In fact, half of all of the world’s topsoil has been lost in the last 150 years alone due to erosion. Soil loss leads to other serious issues like landslides and collapses of undercut outcroppings. Small landslides still cost thousands of dollars to clean up, but big landslides knock out entire homes and can threaten lives. Erosion is often caused by vegetation loss and deforestation, yet it also exacerbates these problems when moving soil carries away plants; roots and all.

Once the soil settles somewhere new, it can also cause issues where it’s arrived. Once rich and fertile topsoil can become clogging and damaging silt when it’s compacted together by the movement of wind or water. This silt fills up sensitive waterways like creeks and rivers, clogging the gills of fish and making it harder for them to reproduce. The water grows shallow, making it warmer and lower in oxygen than many fish and other forms of water life prefer. If the erosion occurs in a mining waste zone or a landfill, the exposure of covered materials can lead to unwanted exposure or pollution. Speaking of pollution, fertilizer and other chemicals tend to runoff along with the erosion that occurs on farms and crop fields. Water quality decreases, reducing fish and invertebrate life in ways that are hard to reverse.

These issues are still only a handful of the problems that are caused by erosion around the world. A few inches of missing soil may simply ruin the look of a new lawn now, but it could eventually become such a big problem that it washes out a public road if there’s enough water to carry away heavier materials.

Among these four primary mechanisms of erosion, there are many specific categories like:

Due to the need to clear and maintain large areas of bare soil to practice modern farming techniques, it’s not surprising that agriculture contributes a large portion of global erosion. Bare soil is the primary cause of all erosion because the exposed soil particles are susceptible to the scouring effects of the wind or rain. When the wind blows over or rains runs over a covered surface, it can’t reach the soil to carry it away. The tilling and weeding methods used by most commercial farms today contribute to erosion by keeping soil bare all year round. Any time that there’s more water on the surface than the soil can absorb, erosion occurs and disturbs the natural distribution of soil.

Many other common agricultural factors contribute to soil erosion. Many farms are located in areas with sandy and light silt soils to grow healthy root crops and plants that require good drainage. Unfortunately, this type of light soil also tends to erode easily with both wind and rain. Annual tilling practices slowly reduce the amount of organic material and compact the surface, two more factors contributing to soil loss. Adding fertilizers on a regular basis raises the salinity of the soil. This creates crusting that further worsens the problem. Keeping plants far apart makes weeding easier and reduces disease, but it also exposes the soil surface to accelerate erosion. With alternatives available to all of these practices, it’s easier than many farmers think to deal with these problems.

Farms on slopes obviously face erosion as water runs down the gradient, but even perfectly flat fields can develop sheet erosion. This begins with standing water that loosens silt and soil along the surface. Wind then follows up by blowing away the loose material. Even if wind doesn’t blow the topsoil away, it becomes concentrated in some areas and removed from others. Ridges and depressions form that encourage other forms of erosion. This turns into rills, then gullies, and then eventually channels so large they form their own short-term creeks and brooks. By simply adjusting tilling practices and aiming to keep bare soil covered, agricultural businesses can address all of these problems and more.

Causes of Mining and Industrial Erosion

Aside from agriculture, mining is the second largest contributor to soil erosion and topsoil loss around the world. Rich deposits of important petrochemicals, minerals, and metals are often located under forested areas that can also feature steep slopes. When trees, shrubs, or even grass are removed to expose the soil and materials below, wind and water also get a chance to carry the material away. The steeply sloped terraces, favored for strip and pit mining, accelerate the speed of water traveling over the surface, adding to the erosive effect. Even after the mine is closed, water traveling over the cover material rapidly erodes the soil if it’s not vegetated properly. Once the cover wears away, runoff water begins to carry contaminants as well as silt and soil. New mining operations are required to minimize their impact on the surrounding environment as much as possible in almost every country, so erosion control is a major part of that goal.

In addition to mining, other industries that create large scale erosion include:

Establishing new roadways and residential developments highly contributes to soil erosion around the world. Erosion often develops in the middle of the construction and grading work for these features, interrupting the process and adding thousands of dollars of soil stabilization to the costs. If the erosion occurs long after the road or new structures are in place, the damage can cost even more to repair. Even with careful planning, erosion often occurs around roads and newly cleared properties due to the creation of new slopes and flat zones. Culverts, drainage ditches, and other features employed to prevent or control erosion, only work well when maintained over time. Yet, it only takes one flood or unusual season of poor plant growth to leave erosion developing along a roadside or above a home.

The careful design and grading of raw land is the single most important step in controlling erosion in any land clearing project. However, it’s rarely enough for a long stretch of roadway or a large property that features many elevation changes and exposed areas. Integrating multiple techniques like geotextiles, geogrids, appropriate cover materials, and routine inspection and maintenance will prevent soil from moving; even in some of the worst flooding conditions.

As mentioned in the agricultural section above, the composition of the soil and its surface, plays a large role in how quickly it erodes. All soils can be protected with erosion control techniques like geotextiles and vegetative cover, but soil testing and evaluation helps predict where they’re needed the most. Waiting until a heavy rain or windstorm moves thousands of pounds of soil into an unwanted location, dramatically increases the costs of erosion repair and control. Spending a little more on soil testing at the beginning of a project can save money on erosion control for decades to come.

Vulnerability to types of erosion also varies based on composition. For example, sandy and light soils are prone to both water and wind erosion, while clay is resistant to wind and still damaged by water runoff. The clay’s heavy weight and larger particle size help it stay in place as wind blows by. Yet, water is still strong enough to disconnect the particles and carry them away. This effect often leads to a change in soil composition. Crop fields that once featured light and fluffy soil texture, ideal for encouraging strong root growth, tend to lose the organic material over time. This allows the light particles of soil to blow and wash away, leaving behind only heavy components that lock tightly together. Erosion slowly results in hard and compacted soil that is low in many important minerals and nutrients. Restoring eroding agricultural land can require bringing in many tons of organic material and amendments, costing thousands of dollars for farmers that already struggle with low profit margins.

Chemicals mixed into runoff, flowing over the surface of bare soil, isn’t just a problem for the area where the water eventually arrives. It’s also a major problem for any polymer-based geotextiles or geomembranes installed as part of the erosion control for the project. Chemical reactions with fertilizers, mining runoff, deicing salts, petrochemicals, or even manure, can weaken and shorten the lifespan of any material used for erosion control and prevention. Make sure to select products that are tested for their chemical resistance, especially for roadway, mining, and agricultural use. Since many of these soil stabilization materials are installed under layers of heavy cover material and soil, they’re not that easy to replace when they slide or break down. Choosing a durable material, that can handle the challenges of the installation, is a better choice than committing to early repairs and replacement.

Watershed management and erosion control agencies can identify eroding areas and make recommendations, but unless the issue is affecting the public, many groups are limited in their abilities to actually make changes. Private landowners, or the companies running mining and industrial sites, often need incentives to encourage them to follow better land management practices. Each region and country require a different approach to encouraging these techniques, but they include incentives, fees for environmental damage, free or discounted erosion control materials, and engineering assistance in designing new erosion control measures.

Erosion is often mistaken as a temporary problem, but it grows over time until you work on erosion control and repair methods. Large gorges and even small canyons have formed over the course of a few decades when erosion was left unchecked for too long. Regardless of why you’re disturbing soil for a new project, you’ll need a plan to prevent loss of soil from every surface where vegetation is cleared away. Don’t let an unprotected slope or raw bank of dirt start an erosion problem that can grow far larger than expected. Start with erosion control from the early stages of planning to ensure it’s as easy as possible to implement.