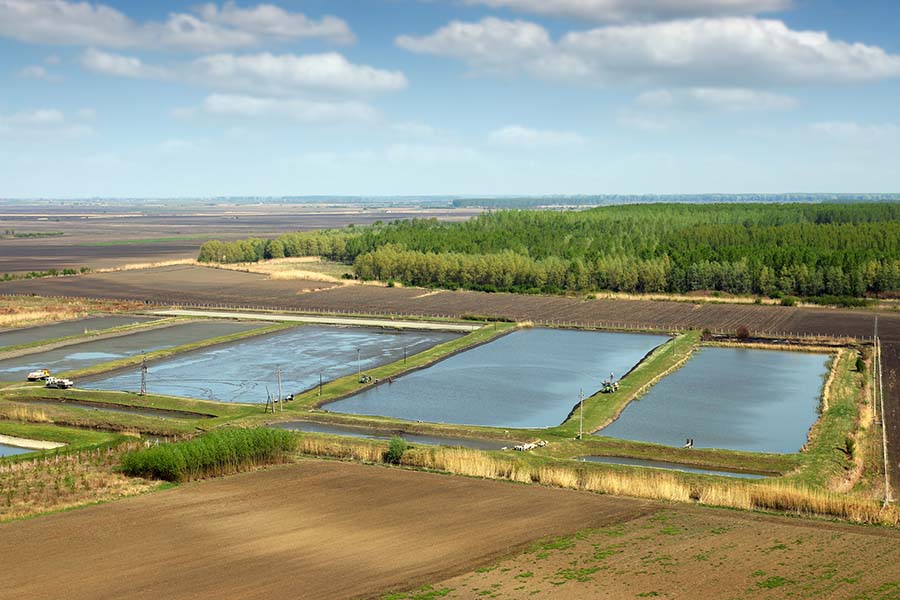 Aquaculture is usually defined as the umbrella term for all the practices used to grow plants or fish in water instead of soil. Taking the soil out of the equation changes many of the costs, harvest windows, and profit opportunities associated with traditional in-ground or container growing. While soil usually supplies support to hold the plant up along with a wide range of necessary nutrients, the combination of a soil-free rooting medium and a steady flow of nutrient-enriched water is often a better choice. The history of aquaculture will help you understand how the discipline has developed to its current level of technology.

Ancient cultures in Rome and China were the first to use rudimentary aquaculture techniques to raise fish, like the common carp, that are still widely farmed today. Over the hundreds of years that followed, these techniques were refined many times over. At the end of the 1800s, new technologies allowed fishery owners to finally start reproducing and hatching their own fry and spawn rather than relying on wild harvested supplies that were costly to gather. By the 1970s, both plants and fish were being grown in highly controlled systems. These methods relied on carefully calibrated nutrient solutions, numerous pumps, aeration equipment, and even computer controllers. Today’s aquaculture can be as simple as the ancient techniques using basic ponds or as complex as a fully automated nutrient flush system.

Aquaculture today is used to grow profitable crops, fish, and the two together in the same system. Some of these plants and fish are eaten, but others are used for decorative purposes or to replace lost species from the wild. Without advanced aquaculture techniques, it would be difficult to raise the quantities of trout and other species currently produced to release back into the wild. Aquaculture is widely used around the world to support sports fishing so that these activities don’t deplete natural stocks. In areas where water is available, but the soil is poor, hydroponics is popular for growing many different fruits and vegetables for a fresh supply that wouldn’t be available otherwise. This has led to many urban farms located indoors or on rooftops to make good use of all the available space. Future uses may include reclaiming mines and underground facilities since artificial lighting makes it possible to create aquaculture opportunities almost anywhere.

Statistics on Global Use

If you’re new to the idea of growing fish and plants together in water, you may not know how widespread this industry already is. In the U.S. aquaculture methods generate over $1.5 billion in value each year. At the global level, aquaculture produced a record high of 171 million tons of fish in 2016. With such a reliable source of food production available for worldwide use, it’s not surprising that the systems can be found in practically every country in the world. Fishing is not expanding much and has stalled out since the early 1990s, but aquaculture is growing year after year to fill in the gap for the growing demand for fresh foods. As of 2014, Asia accounted for over 90% of aquaculture projects.

So why are so many people around the world turning to water-based growing techniques rather than relying on traditional in-ground agriculture? Here are some of the many benefits of aquaculture for both fish and plants.

Two of the best-known types of aquaculture are hydroponics and aquaponics. Hydroponics involves raising fish in a looping or open water system, while aquaponics combines the production of both fish and plants in the same system through the use of separate tanks or ponds. Pure aquaculture is the raising of fish alone in any kind of controlled system. This includes nets set into the open ocean or across rivers and ponds dug out afresh for the purpose of rearing fish. Ocean aquaculture is also better known as mariculture. Algaculture is a rare, but growing, form of aquaculture. It is used to grow algae to turn into fuel, generate power, eat as a food source or feed to livestock.

The earliest aquaculture designs were mostly non-recirculating, open systems in which fresh water flowed in and dirty water flowed out again. While this works well anywhere, you must have a well or river to supply the flow; it’s not the most environmentally friendly design to choose. Recirculating systems require pumps and holding ponds, but the extra complexity is worth the savings in nutrient and water cost. The only water lost in most of these systems is to evaporation; making the most of each gallon you put in. The reused water is also kept out of the environment to reduce the chances of damage. It’s also possible to combine the two designs and discharge water from some parts of an aquaculture system but not from others.

Since it can produce both healthy protein and a wide range of tasty fruits and vegetables in the same system, it’s surprising to many people that aquaculture techniques aren’t more widely used. However, the latest technologies and equipment in this industry are still largely under development. Each year brings new breakthroughs that help people in a wider range of climates and challenging conditions produce profitable harvests. With a growing bank of research into the efficiency and profitability of aquaponics and similar systems, it’s also gradually becoming easier to secure the business funding to start a commercial operation. As these conditions continue to improve, you’ll see the number of aquaculture projects around the globe rise as well.

Ready to start something new in the field of aquaculture or one of its various branches? Let BTL Liners help. Our products are designed to withstand the various challenges of aquaculture use while providing reliable fish and plant safety.